The black and white footage of the statuesque Justice Department attorney John Doar, escorting James Meredith to attempt to register at the University of Mississippi, are unforgettable in U.S. Civil Rights history. Doar died November 11 at age 92 in New York. Of Doar’s distinguished legal career, Rep. John Lewis (D-Ga.), an interviewee in The Rosenwald Schools, stated, “Every major step in the South in those days- he was there.” In his seven years as the second highest ranking Civil Rights attorney at the DOJ, in addition to to successfully prosecuting the killers of Civil Rights volunteers James Chaney. Andrew Goodman, and Mickey Schwerner, Doar won a conviction of the gunman who killed Selma voting rights volunteer and Detroit mother Viola Luozzo.

There were Rosenwald Schools in every Southern U.S. state, as well as Maryland and Texas. Doar tried Civil Rights cases in nearly all those states, sometimes appearing in courtrooms in three states on the same day.
The pioneering attorney who died this Veterans Day, served in the U.S. Army Air Corps during World War Two. He graduated Princeton University, where the 6’4″ Doar played on the basketball team in the mid-1940’s. His first years at Justice were under President Eisenhower. After the Civil Rights Movement, Doar served as special counsel to the House Judiciary Committee, where he led an impeachment inquiry against President Nixon in 1973. One of the young attorneys on his staff was Hillary Rodham Clinton.
Historians have said the Civil Rights Movement was fought on three fronts, equality of education, public demonstration. and legal battles, Julius Rosenwald’s support of Black schools exemplifies the former, and the work of John Doar, the latter.
John Doar, far left, w/ Attorney General Nicholas Katzenbach, and then-Solicitor General Thurgood Marshall: 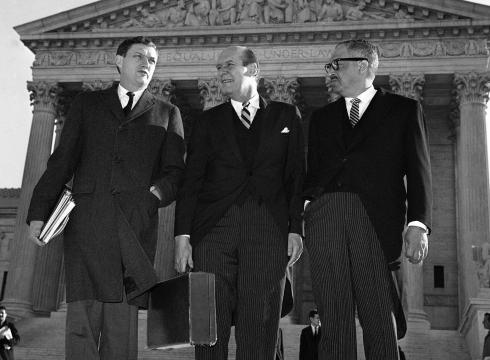