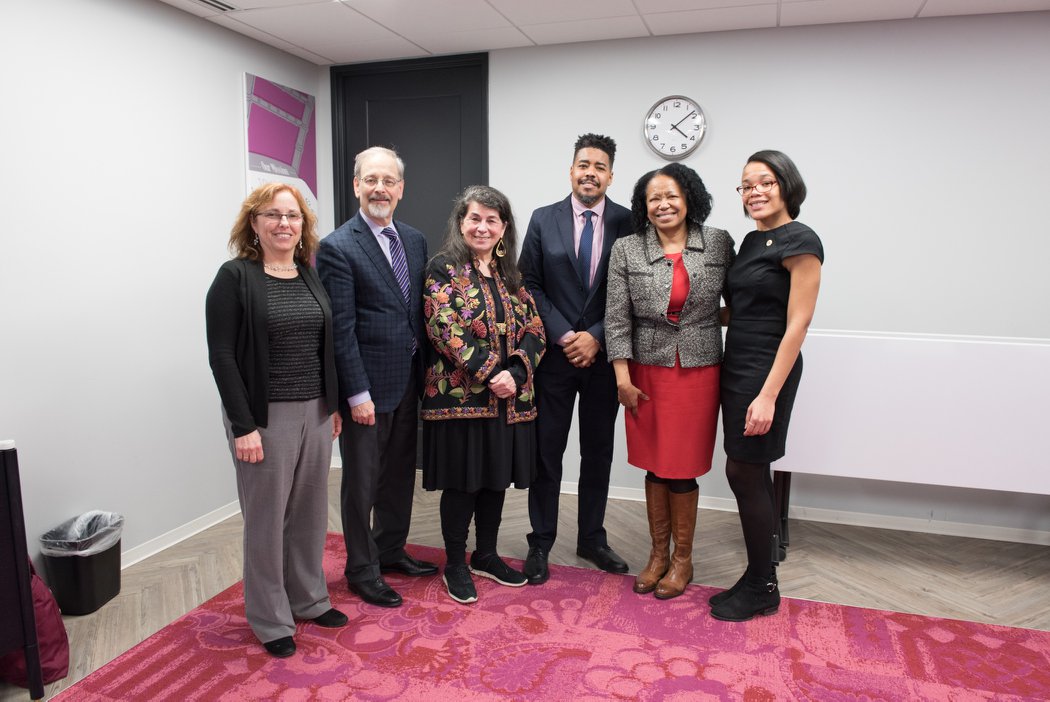 The panel discussed the historical ties between the Jewish and African American communities, the importance of remembering their past allegiances as well as struggles throughout American history and preserving and repairing relations to prevent and combat the resurgence of hate and intolerance across the country. 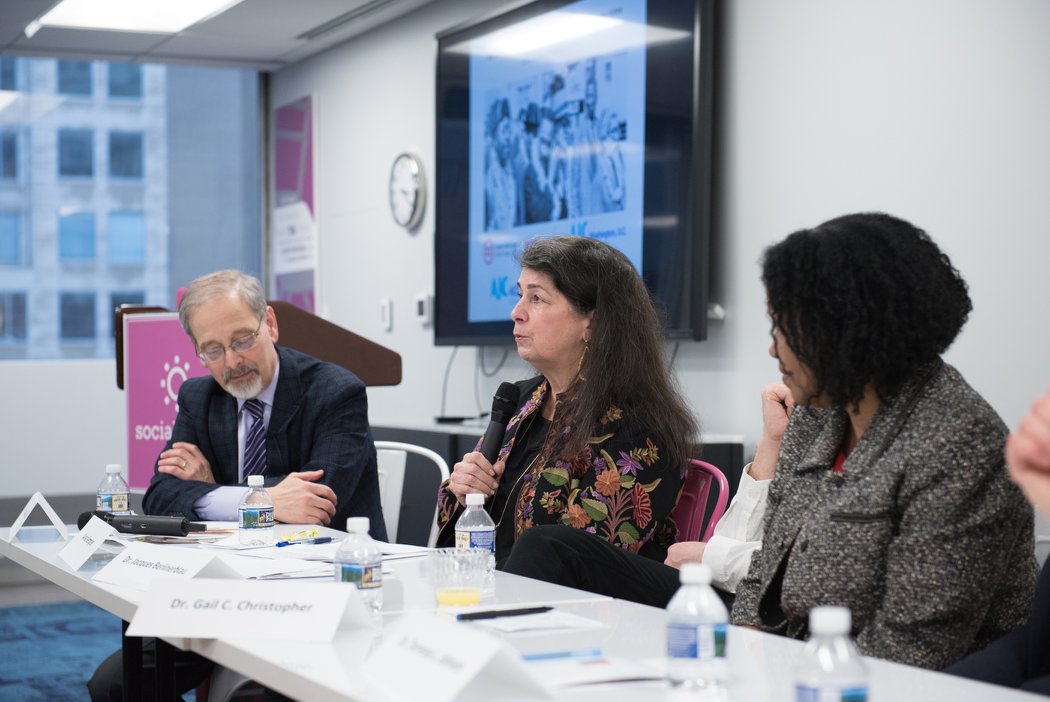 AJC Access DC empowers young Jewish professionals to engage with the world’s foremost politicians, interfaith partners, and cultural leaders as part of the global Jewish advocacy organization. They encourage and enable Jews in their 20s and 30s to develop strong relationships with partners to advocate on behalf of the Jewish community here in Washington D.C., and globally.

On the Road to Tuskegee University

Director Aviva Kempner and poet Ethelbert Miller had a wonderful screening of Rosenwald at Tuskegee University on February 23 and 24, where Julius Rosenwald served on the board and was inspired by Booker T. Washington to build the schools. Tuskegee President Brian L. Johnson introduced Kempner and the screening was preceded by a Meet and Greet with the President’s staff. Speaking after the screening with Miller and Kempner were Dana Chandler, the archivist at Tuskegee University and Rosenwald’s great grandson Phil Rome.

At the Robert R. Taylor School of Architecture and Construction Science, Dr. Carla Jackson Bell, dean of the school, hosted an event for Kempner to present the Rosenwald DVD bonus feature “The Legacy of Black Architects at Tuskegee.” Kempner spoke with architecture students about the unique history of building Tuskegee.

In addition, Miller spoke to two English classes, Shakespeare and World Literature, referencing poet Langston Hughes whose own 1931 tour of colleges in the South inspired this current one. One Tuskegee graduate, Guy Trammell, wrote an enthusiastic response to the showing of the film:
“Again, thanks so much for doing this project, and for bringing the film to Tuskegee. I will be ordering a copy for the youth in our program to see this year and will be spreading the word of the DVD package you mentioned. There are many in and from Tuskegee that would be interested.
By the way, the students sitting behind me, during the film showing, were so excited to see their Tuskegee campus in the film! Those early shots had them whispering to each other, “Look that’s the band! . . . . . Look! There’s _______ Hall!” You really made their day! And mine!”

Tuskegee University is the third stop on the Rosenwald Tour, which was generously funded by the Reva and David Logan Foundation. With more support in the future from funders like the Logan Foundation, the tour can continue to more HBCU’s.

Above: Statue of Booker T. Washington, founder of Tuskegee University

Don’t miss Aviva Kempner in New Orleans this month! She will present the newly produced bonus feature on Edith Stern, the daughter of Julius Rosenwald who was so active in civil rights in New Orleans. The bonus feature will screen February 15th at the Longue Vue House and Gardens, co-sponsored by The National Council of Jewish Women.

Kempner is currently touring the film at Historically Black Colleges and Universities (HBCUs) with poet Ethelbert Miller. As part of the program, Miller will talk about poet Langston Hughes, a Rosenwald Fund recipient who used the funds for his own tour of schools in the South in 1931. Hughes’ tour has inspired the Rosenwald Tour. Miller will give presentations at three classes at Dillard. Stay tuned for more tour dates!

Audiences continue to show their love for the ideals and practices covered in ROSENWALD.
February has been a special loving month for the ROSENWALD film as director Aviva Kempner has gone from Temple Israel synagogue in Sharon, Massachusetts to Fisk University in Nashville to the San Diego Jewish Film Festival to Dilllard University in New Orleans on February 15th to screen the film.

Kempner enjoyed returning to the Fisk Library where she had researched the Rosenwald Fund archives for the film. She was so excited to meet a young scholar from the University of Chicago who is doing her PhD thesis on the Fund.

Poet Ethelbert Miller has accompanied Kempner on the tour to these historical Black colleges under a generous grant from the Reva and David Logan Foundation. Miller is giving sparkling presentations on poet Langston Hughes, who himself had received a Rosenwald Fund grant to tour the South. Hughes’ 1931 tour inspired this modern day 2017 version.

Kempner will present the newly produced bonus feature on Edith Stern, the daughter of Rosenwald who was so active in civil rights in New Orleans. The bonus feature will screen February 15th at the Longue Vue House and Gardens, co-sponsored by The National Council of Jewish Women. As part of the event, Miller will talk about Hughes at three classes at Dillard.

Meanwhile the film is showing in many more places this month and inspiring audience members to give. One couple saw the film in Scottsdale, Arizona and wrote that the film was “FANTASTICLY INSPIRATIONAL” and they decided to re-focus their fund on scholarship.

In these times we should remember that love and support is what Julius Rosenwald was about. Audiences are reacting especially to what Rosenwald said years ago about men with wealth. His modesty lives on in the success and aspirations of those he supported.

“Most large fortunes are made by men of mediocre ability who tumbled into a lucky opportunity, and couldn’t help but get rich.Most people are of the opinion that because a man has made a fortune, that his opinions on any subject are valuable. Don’t be fooled by believing because a man is rich, that he is necessarily smart. There is ample proof to the contrary.” –Julius Rosenwald

Besides raising funds to produce and distribute the ROSENWALD DVD with all the bonus features, the Cielsa Foundation is also fundraising to take the film on a Northern tour. The Atran Foundation just made the first contribution for this future tour.

We thank Atran, Logan Foundation and all our supporters!

On February 20th, Aviva turned out to a screening of Rosenwald at Northumberland High School in Heathsville, Virginia. The screening was teeming with excited individuals, including a large group of Rosenwald school alumni.

However, this was not an average screening. The Heathville event was organized by the Julius Rosenwald School Foundation of Northumberland County- a group that is currently working to repurposed an original Rosenwald school. Before the screening, Aviva received a short tour of the school.

A fascinating, two-story Rosenwald school, the Northumberland collective still has a long way to go in terms of restoration.

You can find out more about how to support the Julius Rosenwald School Foundation of Northumberland County by following them on their Facebook page.

ROSENWALD screening at the National Archives

On February 4th, David S. Ferriero, Archivist of the United States, opened up the evening at the National Archives with a warm introduction for the film, Rosenwald, as well as for Aviva Kempner and author, journalist, and president of the National Archives Foundation A’Lelia Bundles. Bundles also appears in the film.

The showing saw a large turnout as many enthusiastic viewers stayed for a chance to listen to Aviva and A’Lelia discuss the film after the screening.